Stake immersion: from the port of La Rochelle to the Aquarium

A year ago, in partnership with the marina, the Aquarium's biology team immersed 10 1.50m stakes in the port of La Rochelle.

The aim was to give the fauna and flora time to colonise the surface of these poles, and then to move them into the Atlantic area of the visit to present the richness of the port’s fauna.

Three of them are now installed in the heart of the exhibition. What species can you discover that have taken up permanent residence there?

The ascidian: a distant cousin of the fish!

Despite its appearance as a small transparent pouch, it is actually an animal that has intestines, a stomach and a heart, among other things! Its larva is a swimmer and even has a rough spine. It loses its backbone when it attaches itself to its body and takes the form of a bag with two openings. It is hard to believe when you look at it, but the ascidian shares a common ancestor with the vertebrates!

Attached to a support (rock, pontoon, boat hull…), it filters the water to feed on microscopic algae and endures the pollution of ports where there are up to 2000 individuals per square metre. 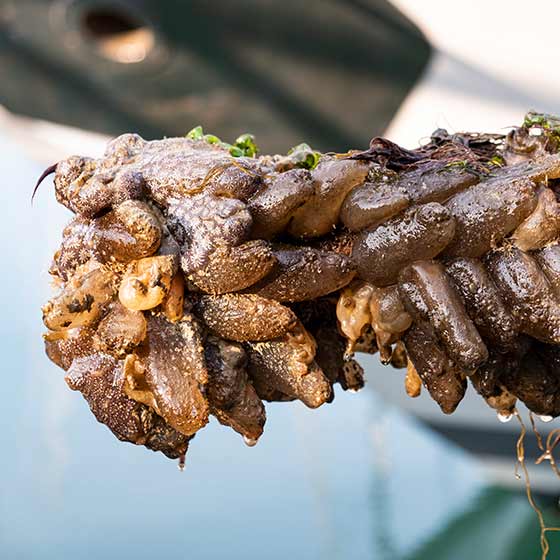 Wakame is a large brown seaweed. It can grow up to 3 metres long, and its average length in the Mediterranean and Atlantic is between 0.5 and 1.2 metres.

Various fish use it for shelter. In particular, wakame is a support or refuge for mollusc eggs and larvae.

This seaweed is one of the most widely cultivated in the world. Korea produces almost 300,000 tonnes of it every year! It is highly valued for its high content of trace elements and proteins and is used in many soups and salads. This is not its only asset: wakame also has pharmaceutical qualities. It is said to have virtues in the prevention of certain cancers and cardiovascular diseases.