The true powers of the octopus

The octopus is one of the smartest invertebrates but do you really know what it can do?

Many scientific researches have been conducted on this animal. It has exceptional learning skills for an invertebrate.

Thanks to its visual and tactile memory, it can adapt to several situations using its past experimentations. It can also learn by watching its fellow creatures and reproduce the same behavior later on.

Regarding its sensorial skills, the structure of its eyes can be compared to the vertebrate’s one with a crystalline lens, a cornea and a retina. It cannot see colors but is able to notice differences of contrasts and patterns. Its tactile sense is also highly developed, each of its 8 arms having nerve endings. The 240 suckers on each arm give it a perfect adhesion, and an octopus can lift 10 times its weight.

What make the octopus unique are also its exceptional camouflage skills. Its skin has several kinds of cells allowing it to change colors, some contain pigmented (black, yellow and red) and others can reflect the greenish and blueish colors of its environment.

These change of colors and sometimes textures are controlled by the nervous system. All these skills are a proof that octopuses are really amazing animals ! 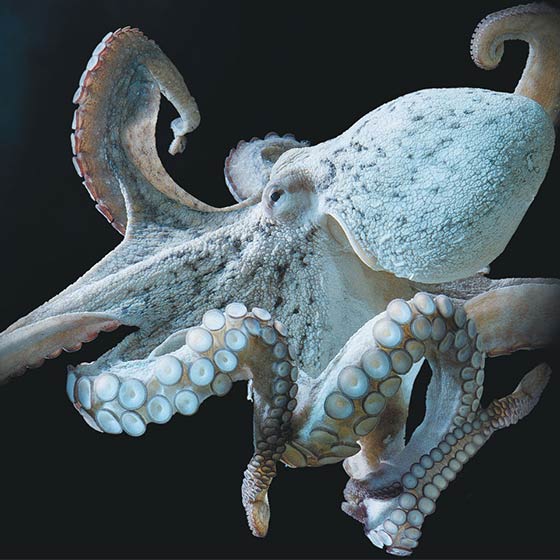