Periophthalmus barbarus
Distribution area
Group
Size
Conservation status
Do you like this species ?
The Atlantic mudskipper is commonly found among mangroves and in the swampy parts of West Africa and Asia. It can adapt to both freshwater and saltwater.
Vertebrates
Actinopterygii
15 centimeters
Least concern
11

This curious fish, also known as the “mangrove goby”, is able to survive temporarily on land.

In that case, it breathes by exchanging gas through its skin and certain mucous membranes rich in blood vessels. It moves with agility over the sand or mud using its powerful, well-developed pectoral fins.

It earned its name of ‘mudskipper’ because of its ability to climb the above-water roots of mangroves thanks to its caudal fin. Its ventral fins form a sucker that it can use to hold tight to a vertical surface. It lies in wait as it hunts various insects and other small invertebrates. 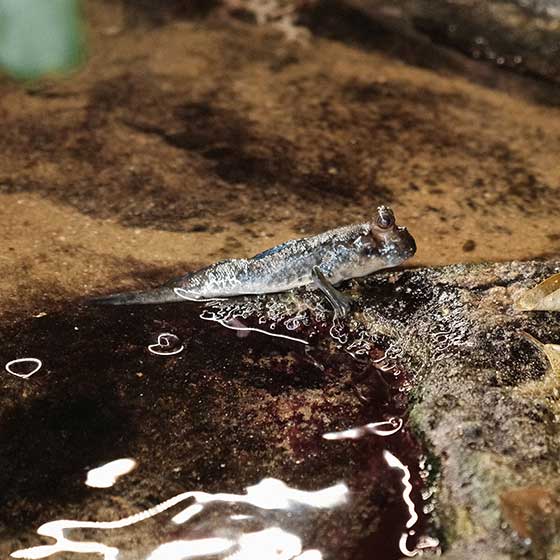 Periophthalmus comes from peri, "around", and ophthalm, "eye". The highly mobile eyes of the fish allow it to see all around, both in and out of the water.