Choerodon fasciatus
Distribution area
Group
Size
Conservation status
Do you like this species ?
The harlequin wrasse is found in the tropical South Pacific: eastern Australia, New Caledonia, Vanuatu, and in the tropical North Pacific: from southern Japan (Ryükyü Islands), Taiwan, the Philippines and Palau. It appears to be absent from the equatorial Pacific.
Vertebrates, Actinopterygians
30 centimetres
Minor concern
2

The harlequin wrasse lives on drop-offs and reef slopes between 5 and 35m depth. It is fairly common throughout its range, which overlaps with a number of marine protected areas.

It is a solitary and territorial animal that constantly explores its habitat in search of food: crustaceans, worms, molluscs, stars or small urchins. Its four prominent canine teeth, which criss-cross in a pincer-like pattern, are used to move rocky scree to find invertebrates. It crushes hard shells thanks to the plates it has in its pharynx.

This species is hermaphroditic. Initially female, the individuals then transform into males. At the time of reproduction, the adults form pairs that seem to be stable over several seasons. 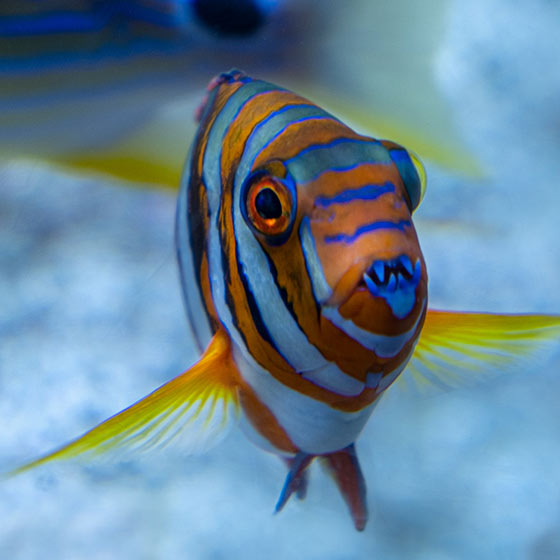 The harlequin wrasse's mouth is remarkable for the sky blue colour of its gums and teeth.