Mnemiopsis sp.
Distribution area
Group
Size
Conservation status
Do you like this species ?
This animal is native to the North Atlantic off the American coast. It can now be found as far away as the Black Sea, the Caspian Sea and the Mediterranean.
Ctenaires
6 centimetres
Not assessed
4

Gelatinous and translucent, this animal is not a jellyfish because it does not have stinging tentacles. It belongs to the ctenaria group. It uses 8 rows of vibrating cilia to move. These moving cilia reflect the light and provide beautiful iridescent reflections.

This species is abundant in shallow coastal seas rich in organic inputs. It can swim up estuaries and tolerates wide variations in temperature and salinity. It also tolerates very low oxygen levels. It is therefore capable of colonising and invading any environment, even polluted ones.

It is a particularly voracious predator of plankton, feeding on fish eggs and crustacean larvae which it captures with tentacles covered in sticky cells. It can form shoals of thousands of individuals when food is abundant.

This species, native to the American Atlantic coast, was accidentally introduced into the Black Sea in the early 1980s with ballast water. Since then, it has invaded the Aegean and Caspian Seas with catastrophic consequences for Russian fisheries. Recently, its presence has been reported on the French coast, particularly in the Bay of Seine via commercial transport. 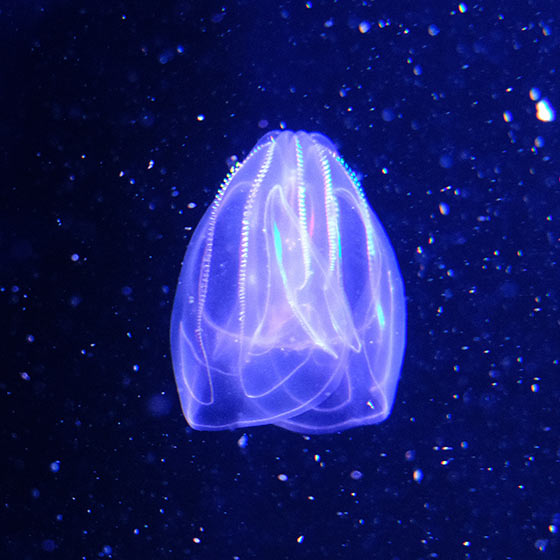 This iridescent and bioluminescent living being is said to have inspired James Cameron to imagine the creatures in his film "Abyss".