Zanclus cornutus
Distribution area
Group
Size
Conservation status
Do you like this species ?
This fish has a wide distribution. It is present throughout the Indian Ocean and the tropical Pacific, including Hawaii.
Vertebrates
Actinopterygii
20 centimeters
Least concern
10

The Moorish idol is related to surgeonfish but differs in its lack of a scalpel shaped spine at the base of its tail and in its extremely elongated dorsal fin.

This species’ colours are highly contrasted, endowing it with a good means of defence. Its stripes are cleverly arranged to interrupt its outline and cause visual confusion among its predators.

At night, its colouring is more uniform. The black areas lighten into greys while the white and yellow sections darken into a grey-brown.

The Moorish idol feeds primarily on sponges, but also on small bottom-dwelling invertebrates and algae. It typically travels in a small group, although it sometimes forms large shoals of more than 100 fish. 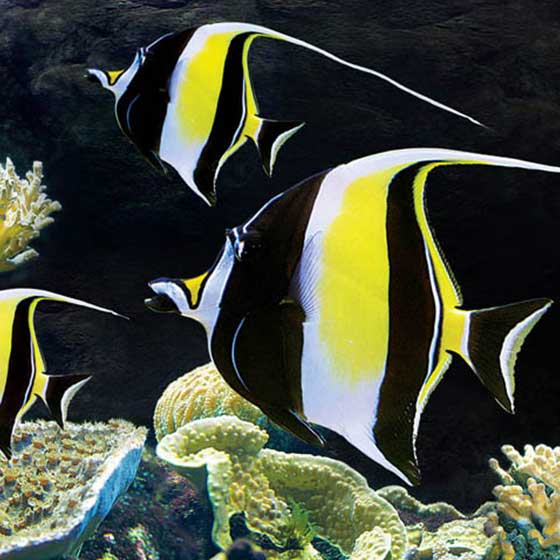 The Moorish idol was made famous by Gill, the scarred character from Finding Nemo. In some parts of Southeast Asia, when this respected "idol" is caught in a net, the fisherman releases it with a bow.