Trachemys scripta
Distribution area
Group
Size
Conservation status
Do you like this species ?
This species comes from the Mississippi Valley and the Gulf of Mexico. After being bred in captivity and irresponsibly released as adults, this turtle can now be found on every continent.
Vertebrates
Chelonians
15 centimeters
Least concern
9

The pond slider is called the ‘Florida turtle’ in French. Despite the fact that it comes from the Mississippi Basin, it owes that name to the fact that it was bred for commercial purposes at many farms in Florida and Louisiana.

It spends time in ponds, lakes and lazy rivers with dense vegetation. It typically lives in an aquatic environment, although it can also be found on land, in search of the sun.

This species is characterized by the red markings behind its eyes and the green and yellow lines on its head.

It is an omnivore with a highly varied diet. It feeds on fish, amphibians, tadpoles and various aquatic and land-based invertebrates: insects, earthworms, crayfish, snails, vegetables, fruits, seeds, and more. 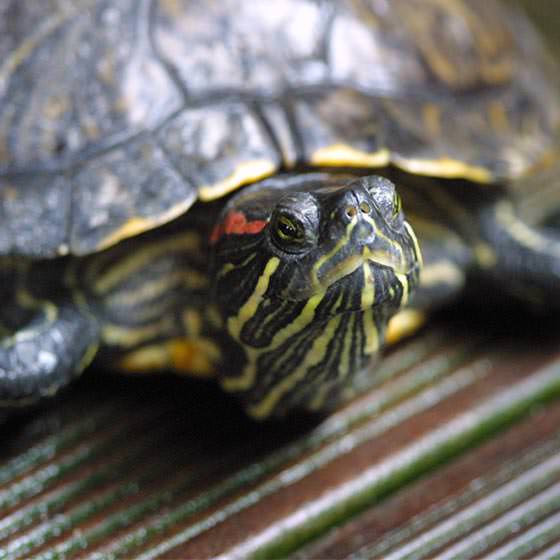 This species mates in the water between April and June, a process that is preceded by the male’s nuptial parade.

The female lays her eggs, preferably on banks of earth or sand with good exposure to the sun. Each clutch contains an average of about 10 eggs. Females can produce one or two clutches annually, throughout their lives.

On hatching, the little turtles are 25 to 30 mm long and weigh in at 5 grams. 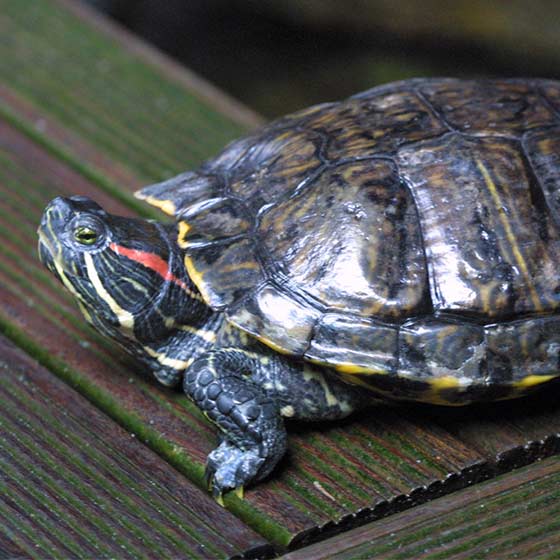 Considered an invasive species, importation of the pond slider to the European Union has been prohibited since 1997. The turtles had been introduced into Europe's waterways by owners wanting to get rid of them. There, they came into competition with the local species, particularly the European pond turtle. This led to serious biological imbalances in our lakes and rivers.