Opistognathus aurifrons
Distribution area
Group
Size
Conservation status
Do you like this species ?
This species from the tropical Western Atlantic is common to Southern Florida, the Bahamas and the Caribbean.
Actinopterygii
10 centimeters
Non évalué
9

This fish lives up to 40 m underwater, on stretches of sand and coral debris nearby reefs.

It uses its mouth to dig a burrow in the sand. Although they rarely live alone, each animal has its own burrow. During the day, they hold themselves vertically above their holes, where they retreat, tail first, at the first sign of alarm.

When small fish approach, they defend their territory by displaying an open mouth to the adversary. The jawfish hunts by lying in wait above its burrow, catching zooplankton as it floats by. At night, it hides in its hole, which it closes off with a shell or other piece of detritus.

During the reproductive season, the male courts the female by swimming around her and surrounding her with his fins. The male then broods the eggs in his mouth for a week. At that point, he stops feeding. 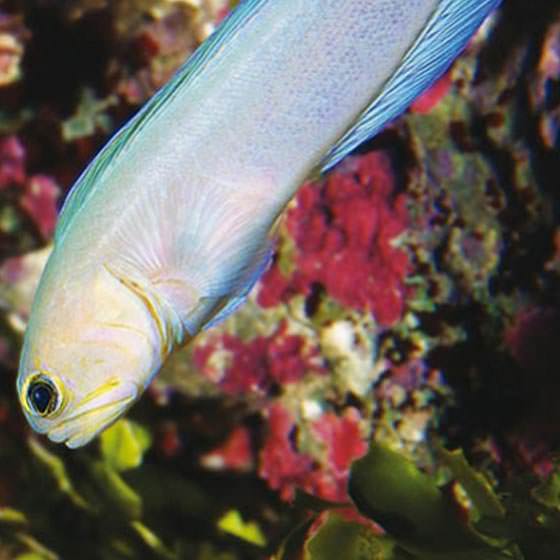 The behaviour of the jawfish bobbing in and out of its burrow throughout the day earned it the nickname of 'marionette' in the French-speaking West Indies.